Matthew 24-25 by Thomas Ice
Since I have shown in previous installments that Matthew 24 is a future, end-time prophecy, the next issue to tackle is when will verses 4 through 14 come to pass? There are two major views that futurists, like myself, tend to hold. First, some believe that verses 4-14 refer to the inter-advent age-that is the time between Christ’s first coming and the beginning of the tribulation. Second, some hold that verses 4-14, especially verses 4-8, refer to the first part of the tribulation and correspond with the first four seal judgments of Revelation 6:1-8. I think that the second view is correct...
Series:An Interpretation of Matthew 24–25

Since I have shown in previous installments that Matthew 24 is a future, end-time prophecy, the next issue to tackle is when will verses 4 through 14 come to pass?

There are two major views that futurists, like myself, tend to hold. First, some believe that verses 4-14 refer to the inter-advent age-that is the time between Christ’s first coming and the beginning of the tribulation. Second, some hold that verses 4-14, especially verses 4-8, refer to the first part of the tribulation and correspond with the first four seal judgments of Revelation 6:1-8. I think that the second view is correct.

Many futurist interpreters of the Olivet Discourse believe that verses 4-14 describe the general signs of the inter-advent age. Dr. John F. Walvoord, an advocate of this view says that verses 4-14 are:

describing the general characteristics of the age leading up to the end, while at the same time recognizing that the prediction of difficulties, which will characterized the entire period between the first and second coming of Christ, are fulfilled in an intensified form as the age moves on to its conclusion." [1]

Dr. Walvoord believes that verses 15-26 are specific signs that describe the tribulation, while verses 27-31 relate to the second coming.[2]

Within the inter-advent age view is a variation of this perspective. Some think that verses verses 4-8 are general signs of the inter-advent age leading up to the tribulation. While verses 9-14 reference the first half of the tribulation. "The events concerning the first half of the tribulation are recorded in Matthew 24:9-14," says Dr. Arnold Fruchtenbaum. This "passage begins with the word then, pointing out that what Christ is describing now will come after the event of nation rising against nation and kingdom against kingdom." [3]

I believe that Matthew 24:4-41 refers to the seven-year period (Dan. 9:24-27) that many commonly call the tribulation. The tribulation is divided in half by the abomination of desolation, mentioned by Jesus in verse 15. Thus, verses 4-14 refer to the first half of the tribulation and are parallel to the first five seal judgments found in Revelation 6.

"If our interpretation is the right one there must be perfect harmony between these three: Old Testament Prophecy: Matthew xxiv:4-44, and Revelation vi-xix." insists Arno Gaebelein.[4] I believe just such a harmony exists, especially between the Olivet Discourse and Revelation. This is what convinces me that verses 4-14 refer to the first half of the tribulation. Gaebelein continues:

If this is the correct interpretation, if Matthew xxiv:4-14 refers to the beginning of that coming end of the age and if Revelation vi refers to the same beginning of the end and that which follows the sixth chapter leads us on into the great tribulation, then there must be a perfect harmony between that part of the Olivet discourse contained in Matthew xxiv and the part of Revelation beginning with the sixth chapter. And such is indeed the case.[5]

"The acceptance of this view, in part," observes John McLean, "is dependent on how much weight is given to the parallels between the synoptics and Revelation." [6] Since all futurists see the Olivet Discourse as parallel to Revelation to some degree, it makes sense that these two portions of Scripture would be focused on the same basic time period-the tribulation. Dr. McLean has displayed these relationships in the following chart.[7] 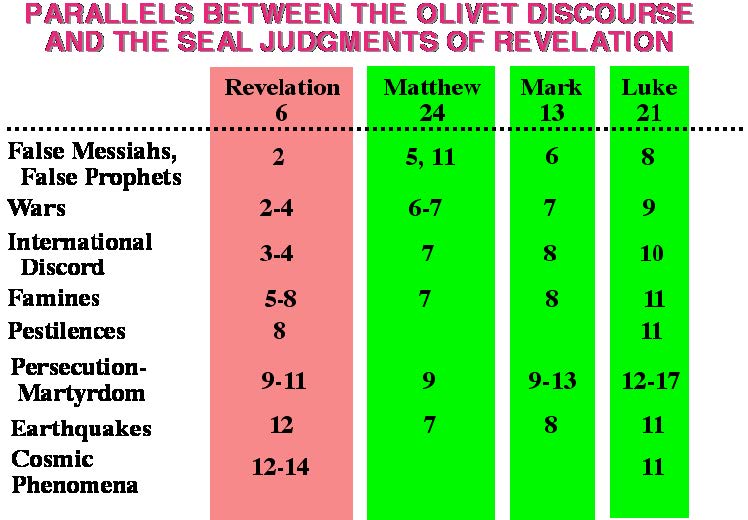 Matthew 24:8 characterizes the events of verses 4-7 as "the beginning of birth-pangs." The Greek word ôdinon means "the pain of childbirth, travail-pain, birth-pang." It is said to be "intolerable anguish, in reference to the dire calamities which the Jews supposed would precede the advent of the Messiah." [8] Another authority agrees and says, "of the ’Messianic woes’, the terrors and torments that precede the coming of the Messianic Age." [9]

Most likely our Lord had in mind the Old Testament reference to birth pangs in Jeremiah 30:6-7, which says, "’Ask now, and see, if a male can give birth. Why do I see every man with his hands on his loins, as a woman in childbirth? And why have all faces turned pale? ’Alas! for that day is great, there is none like it; and it is the time of Jacob’s distress, but he will be saved from it." Dr. Randall Price explains the birth pangs of Messiah as follows:

The birth pangs are significant in the timing of the Tribulation, as revealed by Jesus in the Olivet discourse (Matt. 24:8). Jesus’ statement of the "birth pangs" is specifically that the events of the first half of the Tribulation (vv. 4-7) are merely the "beginning," with the expectation of greater birth pangs in the second half (the "Great Tribulation" ). Based on this analogy, the entire period of the seventieth week is like birth pangs. As a woman must endure the entire period of labor before giving birth, so Israel must endure the entire seven-year Tribulation. The time divisions of Tribulation are also illustrated by the figure, for just as the natural process intensifies toward delivery after labor ends, so here the Tribulation moves progressively toward the second advent (vv. 30-31), which takes place "immediately after" the Tribulation ends (v. 29). As there are two phases of the birth pangs (beginning labor and full labor), so the seven years of Tribulation are divided between the less severe and more severe experiences of terrestrial and cosmic wrath, as revealed progressively in the Olivet discourse and the judgment section of Revelation 6-19.[10]

Paul also uses the motif of birth pangs in 1 Thessalonians 5:3 where he says, "While they are saying, "Peace and safety!" then destruction will come upon them suddenly like birth pangs upon a woman with child; and they shall not escape." The context of this passage relates to the tribulation period, which fits the other uses of birth pangs.

Raphael Patai in his helpful book (The Messiah Texts) has dozens of references to extra-biblical commentary from Jewish writings in a chapter entitled "The Pangs of Times." [11] Patai tells us that "the pangs of the Messianic times are imagined as having heavenly as well as earthly sources and expressions. . . . Things will come to such a head that people will despair of Redemption. This will last seven years. And then, unexpectedly, the Messiah will come." [12] This widespread Jewish idea fits exactly into the framework that Jesus expresses in the Olivet Discourse. The birth pangs of Messiah, also known as "the footprints of the Messiah," [13] support the notion that Matthew 24:4-14 relate to the tribulation period leading up to the second advent of the Messiah since it is known as a time of great tribulation that results in Messiah’s earthly arrival.

I have often been ask on radio talk shows if I believe that events like earthquakes, famines, wars, etc. meant that the end is near. Of course I always say no. This usually surprises the host, since they so often hear from other prophecy teachers that these things have current prophetic significance. As you can see, if they don’t refer to the church age, then they must have reference to the tribulation. While it is likely that we stand on the verge of tribulation events, we are not yet in that time period. Since Matthew 24:4-14 cannot happen until after the rapture and the start of the tribulation, it is wrong to say that such events are prophetically significant in our own day. The birth pangs do not start until Israel faces her time of trouble. Maranatha!

[3] Arnold G. Fruchtenbaum, The Footsteps of the Messiah: A Study of the Sequence of Prophetic Events (San Antonio: Ariel Press, 1982), pp. 439-40. For the most exhaustive presentation of this view that I have found so far, see David L. Cooper, Future Events Revealed: According to Matthew 24 and 25 (Los Angeles: David L. Cooper, 1935).